The Claddagh Ring Story: A Symbol of Love and Devotion, A Sure Sign of Your Irish Side!

One of the reasons we cherish the claddagh ring story is that it plays an important role in Irish history and culture.

Claddagh is actually the name of the oldest fisherman village in Ireland, located next to lovely Galway city. 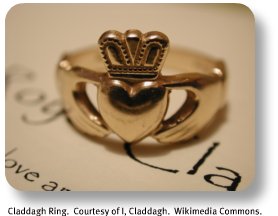 It is also the birthplace of the symbol of claddagh, and its most famous expression - the Claddagh ring.

In the meantime, please enjoy the Claddagh Ring Story below.

What Does it Mean?

The Claddagh symbol consists of a heart enclosed by two hands with a crown above them, symbolizing loyalty, friendship, and love.

A traditional expression, often associated with the symbol (especially if a Claddagh ring is being given to someone) is “Let love and friendship reign."

The Claddagh Ring Story: Where Did It Come From?

One legend holds that the symbol was invented to be an alert system to the natives.

Ships that belonged to the town and were considered amicable tradesmen would bear the symbol on the sails of their ships and on their clothing.

If a foreign ship was to fish in their waters without the symbol, the local fishermen would kill all of the ship’s crew.

Another legend involving the claddagh has a bit of historical truth to it. The Claddagh ring was invented by a man by the name of Richard Joyce. He was a native to city of Galway in Ireland.

With the intention of getting married to his lover when he returned from working in the West Indies, Joyce was captured while he was at sea, enslaved and sold to a Moorish goldsmith.

While enslaved, Richard learned the craft of goldsmithing from his new master in Algiers. After William III was crowned king, he issued a decree that implored the moors to release all of their British prisoners and slaves. 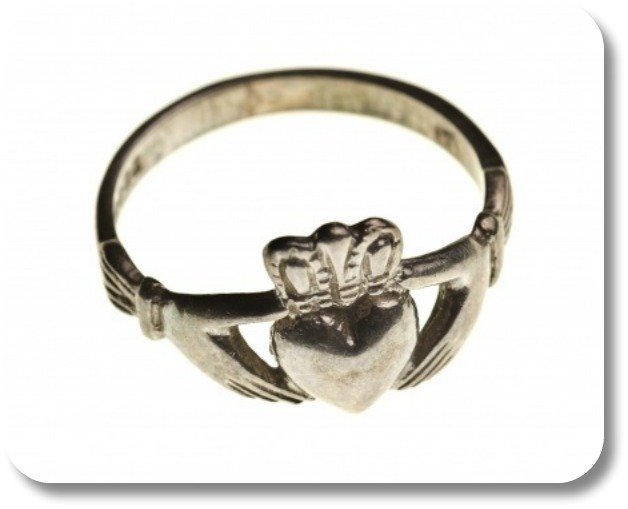 Because of that decree, Richard Joyce became a free man once more.

However, because Joyce was such a well mannered and respectful slave during his imprisonment to the goldsmith, the goldsmith offered Joyce his daughter’s hand in marriage and a portion of his wealth to stay.

Joyce, still in love with his lover that was awaiting his return in Galway; turned down the goldsmith’s offer and returned home. He presented his future spouse with the Claddagh ring that he made while he was a slave in Algiers.

They married and thus the Claddagh ring story was born - one that serves as a symbol of one’s commitment, loyalty, friendship and real love for their friends and mates.

The modern day design of the Irish Claddagh symbol was first crafted into a ring during the 17th century.

Many families keep these rings and pass them down through the generations from mother to daughter as heirlooms.

Today the rings are very popular all throughout Ireland and around the world, in part because of the symbolic meaning they carry.

If a claddagh ring is worn on the right hand with the pointed end of the heart pointing towards the fingertips, it is a symbol that the person wearing the ring is not currently involved with anyone.

On the other hand, if the pointed end of the heart is pointed towards the knuckles, it means that the wearer is taken or married.

There is also an alternate version of the Claddagh symbol that was made in Dublin over a century ago.

The Dublin style Claddagh ring has two hearts, one pair of hands and no crown. This version is called the Fenian Claddagh Ring.

Today, the Irish claddagh symbol can be found on more than just jewelry, often adorning pieces of art, clothing, tableware and many other Irish expressions.

That Was Fun!  What's Next?