The Shamrock Symbol:  An Unmistakable Sign of Your Love for the Emerald Isle!

Our family loves the beauty of the Irish shamrock symbol, and it appears on many of our expressions from jewelry to clothing to wall art. 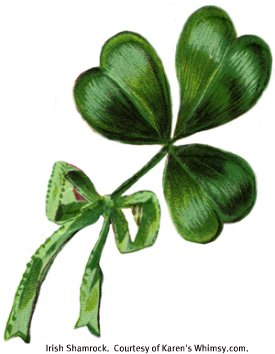 One phrase associated with this iconic symbol is to 'be in the clover' - meaning to live a happy, carefree life.  So here is wishing you a life in the clover!

Meanwhile, let's have a closer look at the lovely shamrock symbol.

How Long Has This Been a Thing?

The word 'shamrock' derives from a word in Gaelic meaning 'little clover.'  Various written references to this plant can be found as early as 1507.

In Irish writings you can find it referred to as far back in history as 1707.

As a symbol of Ireland, with its typical 3 leaves on each stem, the shamrock is entangled with the belief that 3 is a magical and sacred number.

Legend holds that St Patrick used the shamrock in his teachings to discuss the holy trinity.

According to legend, St Patrick eliminated all snakes from Ireland. Many believe he purposefully covered the land with this special plant to keep snakes off the Island.

Since there are no snakes to be found in Ireland, this is proof to some people the legend is true!

According to our own scientific research, snakes will not live where this type of clover is grown no matter what country :-).

It also appears that the plant has been used as a snake venom treatment!

The Irish Shamrock Symbol Gets Banned...

During the 1770s the Irish Volunteers used the Shamrock as their mark. It soon became a symbol of rebellion.

In fact it got so popular for this reason that it was banned by the Queen of England.

About this time, the song "Wearing of the Green" (click to visit a YouTube video in a separate tab) was written as a light-hearted protest over the banning of this important symbol.

Today the shamrock symbol it is simply a world-wide image of Irish culture and heritage.

How Can I Express My Irish Side Using the Irish Shamrock?

Well, one particularly creative way is to purchase and grow Irish Shamrock Seeds.

If you really want to get your hands dirty (pun intended) you can also buy real dirt from Ireland to grow them in (some believe that's the only way you can grown them).