Traditional Irish Sports: Watch or Play Them to Express Your Passion for Irish Culture!

When we watch or participate in traditional Irish sports, we experience the passion for hard work, social connection, and national pride that is so much a part of the culture.

You can feel it - in the pubs, in the stands, and in Irish homes around the world. 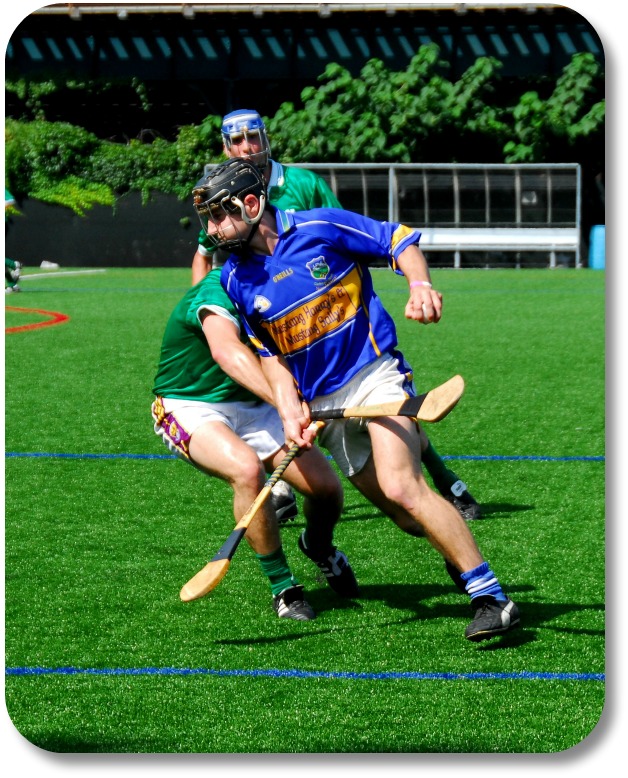 Let's have a look at a few of the more popular Irish sports. Who knows, maybe you'll be come a fan, or even better yet - a player!

If this inspires you to have a look at more Irish customs, visit our Irish trivia and traditions section here!

No, it's not something you do after an all-night pub crawl ... well, ok maybe it is... but it is so much more than that!

To an Irishman or woman, hurling is a game of national pride for several reasons, including the fact that it was played by heroes of ancient Ireland.

It is also widely-regarded as one of the fastest games on earth, not to mention one of the most dangerous!

Players are allowed to charge at each other with their hurleys (sticks) ready to wreak destruction - well within the rules of play.

Speed, agility and marksmanship are essential in this remarkably exciting Irish sport. Add in a “no guts, no glory” attitude and you can become the next champion.

The female version of hurling is camogie. The kit (uniform) is different, but the game is largely the same as hurling.

The sport is said to be slightly less brutal (although you might want to watch and draw your own conclusion).

But it is still fast, exciting and physical with rules are similar to men's hurling. It was introduced in 1904 with over 100,000 players in Ireland and in Irish communities abroad.

Fast plays are the norm.

For many true-blooded and proud Irish folk, the only football is Gaelic football and we can definitely understand why.

At first glance, Gaelic football is similar to the more globally known football (soccer) in several ways including the players’ kit, the ball and the playing field.

But you'll see one important difference when the player actually picks up the ball, runs away with it for 4 steps, and passes it to another player.

The best thing about Gaelic football is that, like global football, it can be enjoyed almost anywhere you can find a large open area and a makeshift goal.

And - it is the most popular sport in Ireland measured by attendance.

Irish rugby may have English and Scottish origins but, as with many things, it has been adapted to suit the unique people of the Emerald Isle.

One of my favorite moments in Ireland was watching the Irish national team defeat the mighty Australians on a picture perfect evening at Aviva Statium.

Irish rugby is played with the characteristic gusto, fighting spirit and strong sense of competition among teams, so much so that it is not unusual for the spectators to go into fights in defense of their favorite clubs.

Rugby is also played on the streets, in schools and in other open areas. We suggest bringing a small first aid kit just in case.

The Fighting Irish. This is the most fitting name for Irish boxers who have made and continue to make their mark on the international boxing stage.

Boxing clubs are aplenty in the Emerald Isles with many Irish champions starting on their boxing career at an early age.

It has become one of the most popular Irish sports.

We can mention Katie Taylor, Ireland’s boxing sensation and London Olympics 2012 gold medalist in the sport, as a prime example.

If you have enjoyed our section on Irish trivia and traditions, you have probably been exposed to many of the most entertaining ways to express your personal Irish side!

Until then - thanks for visiting Traditional Irish Sports!  Please continue exploring your Irish side at Irish-Expressions.com.