Ireland History: Find Out Where Irish Expressions Came From - The Fun Way!

This will not be your average Ireland history lesson.

Think of this page as one way to tell the story of Ireland, from the beginning to the present - in an entertaining way that you may want to share with your friends! 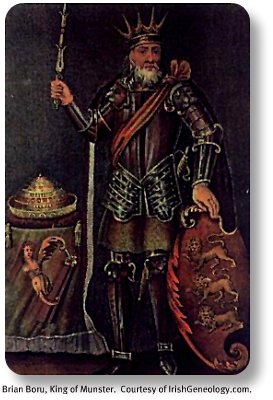 Have you ever wanted to know a little more about your Irish heritage - Irish heroes, where Irish legends came from, what your Irish ancestors were up to?

This is a great place to start!  You may even turn some of this information into unique Irish expressions of your own!

Ireland history is long (being history and all), but far from boring! Let’s start in the early days, where there was no beer, no potatoes, and no Lord of the Dance.

If you should find yourself wanting more detailed information about Ireland, you can pay a visit to our Irish trivia and traditions section here...

Meanwhile, let's have a quick look at Ireland History!

A lot of the things that are known about Ireland in the early years can only be found in mythology, poems, and a lot of digging in the dirt.

The first settlers are believed to have arrived in Ireland around 10,000 BC, and these people were considered hunters.

Farmers arrived in Ireland a few thousand years later (around 5,000 BC), and they settled down in the hills and plains of Ireland to grow pretty much anything that could survive in so much rain.

They had axe heads that helped them to cut down trees, but they were soon put out of business (3000 years later in 2000 BC) by the Bronze Age’s beginning.

More and more people soon began to arrive in Ireland by the 1200s BC, and the first crannog (artificial island) dwellers began to make their homes in the soggy parts of the country.

The Celts arrived in Ireland around the 600s BC, and they held sway in Ireland until Christianity arrived years later. These were Celts from central Europe, whereas the Celts from the Switzerland area only reached Ireland in 200 BC.

At this time, the country was separated into roughly 150 tuaths, or mini kingdoms, which were ruled by a king of many tuaths, who was ruled by one of the kings of the five provinces of Ireland.

The Gaels arrived in 100 BC, confusing everyone with their language and making sure that only a very few people understood what the other person was saying.

During this next part of Irish history, not a lot has been recorded.

The Romans had conquered Britain and parts of Scotland, but they never conquered Ireland (it was too rainy for them, probably).

Their influence extended into Ireland, along with some Roman weapons that were used by an exiled prince to take back his island.

Ireland was soon inhabited by the Scoti in 300 AD, during the time that has come to be known as the Irish Dark Age.

The Scoti actually attacked Britain and settled there during the Great Conspiracy in 367 AD, and thus Scotland was populated.

Irish history was graced by the visit of St. Patrick in 432 AD, and his work to convert the Irish from paganism to Christianity is the reason that the Irish worship God instead of trees, bushes and rocks.

Palladius was the first bishop of Ireland sent in 431 AD by the Pope, meaning that there were already Christians populating Ireland.

This has led many experts to believe that Christian missionaries had already been living in Ireland before this date, but this is the first official arrival of Christ.

During this time, many wars were fought by people with hard to pronounce names.

795 AD was actually the first recorded raid by the Vikings into Ireland, and these raids were usually quick and designed to steal cattle and loot.

However, the Vikings soon began to establish settlements in the country, including what is now Dublin.

They never quite managed to take control of the island thanks to the stubborn resistance of the Irish, but they were a major part of Irish history.

Ireland was divided by the time the 12th century rolled around, meaning that the Normans who invaded Ireland didn’t fight against a united army.

The Normans controlled most of the east coast of Ireland, all the way up to Ulster and well into the island.

However, the Normans soon lost control, and the Irish were beginning to conquer their land as soon as 1261 BC.

The Black Death rolled through Ireland in 1348, and it wiped out many of the English and Norman settlers that lived in far denser settlements than the Irish.

By the 15th century’s end, there was almost no English authority in Ireland.

Ireland was conquered by Henry VIII, and it was made a Kingdom of Britain in 1541.

Queen Elizabeth and King James I both re-conquered Ireland during the Desmond Rebellions and the Nine Years War, and the land was ruled by a British government.

The 17th century is considered one of the bloodiest in Irish history, as there were two periods when war was constantly raging.

1691 saw the end of the Jacobite resistance, and the Penal Laws that the British had enforced in years past were restored.

Thus started the antagonism between Irish and English.

The Irish ruling class was part British, but they saw Ireland as their country and thus tried to establish more favorable relationships for trade and commerce between England and Ireland.

This ruling class was primarily Protestant.

The Great Famine is one of the most important parts of Irish history, as over 150,000 natives emigrated from the country after 400,000 Irish died.

It was caused by many things, including the fact that the potato was one of the main foods eaten by the Irish people.

The potato blight in Ireland caused the loss of more than 50% of the potatoes in 1807, with the crop of 1821 and 22 being lost completely.

The Acts of Union was established in 1801 after the Irish Rebellion of 1798, and Ireland soon became a part of Great Britain.

Daniel O’Connell started his work to emancipate his country in 1823, and all of the Irish efforts to emancipate themselves culminated in 1912 with the War of Independence.

The Anglo-Irish Treaty was signed in 1921, creating the Irish Free State and giving the Irish their freedom from English rule.

Not Bad for a History Lesson!  What's Next?

Until then - thanks for visiting our quick overview of Ireland history!  Please continue exploring your Irish side at Irish-Expressions.com.