There are many famous characters and images in Irish folklore, legends and fairy tales.  Reading and telling these stories is one great way of expressing your love of Irish heritage. 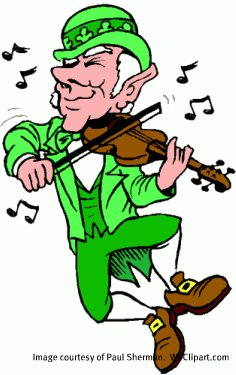 Here we will take a closer look at some of these characters, focusing on the magic and myth that make them so fascinating to so many!

In Ireland, the word ‘sidhe’ commonly refers to Faeries, who are important characters in the folklore of Ireland. Some believe these were god-like people who overthrew ancient Ireland.

When they themselves were overthrown by Milesians, they hid in earth barrows (or sidhe). They were deprived of affection and offerings, and subsequently withered and shriveled until they became little people.

Some Irish Christians believe that a Faerie is a fallen angel, not bad enough to go to Hell but beyond saving for Heaven. They therefore live amongst us mortals.

Others believe believe that a Faerie is a spirit living amongst humans and go about their life like other humans do.

Then return to Irish Expressions for other examples of the folklore of Ireland, and other expressions of Irish culture.

Another staple of Irish folklore, Leprechauns are smart and devious little things.

These wee folk were believed to inhabit Ireland before the Celts arrived. They dress smartly in a suit with a waistcoat, hat and buckled shoes.

They are intelligent and mischievous folk and are generally harmless although they will play an odd trick or two on the local population and farmers of towns and villages.

It is believed that each leprechaun owns their own pot of gold that is hidden deep within the countryside of Ireland. Irish fairies gave the leprechauns magical powers to protect their pots of gold if an animal or human gets hold of them.

To escape capture the leprechaun will grant the human or animal three wishes or make them disappear into thin air!

A changeling is believed to steal a human and take them to live within the Faerie realm. New mothers and midwives may occasionally be taken, but young children and babies are especially at risk.

When a human baby is taken a Faerie child will be left with the human mother. A Faerie mother coverts a human baby as they are usually sturdy, healthy and happy beings.

The Blarney Stone is a limestone block that is the lucky charm of Ireland. It was set within a tower at Blarney Castle in 1446 and according to Irish folklore, it contains magical powers.

The legend goes that there was an old woman who cast her spell on a certain king because he saved her life. If the king managed to kiss the stone while under the spell then he would achieve great eloquence.

Today, there are people who come from all corners of the earth to kiss this stone and attain the gift of the gab.

The Burren is an Irish word that means ‘grey rocky place’. It is 50 sq. miles of huge irregular limestone slabs that have deep cracks. They are located within County Clare.

This earie and humid moonscape is actually a natural rock garden. Subtropical flora thrives next to plants that grow in the Arctic. Spectacular streams and caves lie beneath this scarred surface.

A few prehistoric gravesites (or dolmens) can also be found in this area. Irish folklore about this area says that the holy wells are able to cure bad sight and that ghostly horsemen live in the caves.

It is said also that mysterious and unexplained lakes will appear then disappear, taking maidens transformed into swans.

The Farr Darrig (or Red Man) is related to a leprechaun and has a splotched yellow face. He dresses entirely in red. He can sometimes travel invisibly and delights in mockery and mischief.

He can make sounds like a cooing pigeon or the thud of a wave on a rock, but his favorite is a hollow, dull laugh of dead men. He can also give a human an evil dream.

Even though he is a prankster, as with many characters in Irish folklore, the Far Darrig ultimately means no harm. He is actually quite good-natured and brings luck to anyone he approves of, but he cannot seem to resist the preliminary teasing.

In many old Irish myths and legends the banshee is a female spirit who is a messenger from the Otherworld.

She is thought of as the omen of death. This spirit can be a scary figure or an attractive one.

In Irish legend, the banshee wails close by to where a person is going to die.

It is thought that some families have banshees linked to them, and when a family member dies the banshees can be heard crying to announce it.

Dagda was the leader of the gods and owned a large, richly-decorated harp. It was stolen by a rival faction once during a war, who left the harp is an uninhabited castle.

Dagda followed the rivals and called for the harp. The harp found Dagda who played it three times.

The first time, the music made everyone cry. The second time it made them laugh. The third time it put everyone to sleep except for Dagda, which allowed him to get away with his magical harp!

The Causeway is a spread of basalt columns along the Antrim coastline in Northern Ireland. Legend holds that the Causeway was built by the giant Finn MacCool, and originally stretched all the way to Scotland.

Benandonner, a Scottish giant, challenged MacCool to a fight.  MacCool accepted and built the Causeway to reach his adversary.  Benandonner, who was much larger than MacCool, was tricked by MacCool's wife into thinking Finn was the more powerful of the two.

Banandonner fled back to Scotland fearing for his life, breaking apart the Causeway, leaving the partial pathway we see today.

For more information of this type, you may want to pay a visit to our main section on Irish Sayings here!