Gaelic Name Meanings: One of the Surest Signs of an Irish Cultural Heritage!

Gaelic languages, and Gaelic name meanings, are a part of the Celtic languages of Cornwall, Scotland, the Isle of Man, Wales, Ireland, Patagonia and the Cape Brenton Islands. 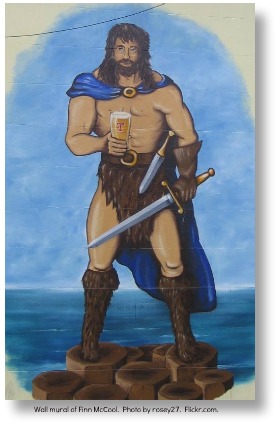 There are two distinct types of Gaelic languages. One is in Scotland and has various forms similar to regional accents in the United States.

The other language is the most beautiful of them all, the Irish Gaelic language. There are also various type of accents based on the locale.

While someone from Scotland and Ireland could probably understand one another if they both speak their native tongue slowly, the spelling and pronunciation of some names is quite different.

Since this site is about Irish expressions, we'll focus on Irish Gaelic name meanings.

In Ireland, Art isn’t just a nickname for Arthur; it’s a name that stands alone.

It comes from the ancient Gaelic word for bear, which many interpreted to mean a champion or magnificent warrior, not the bear, the animal.

Art was a Pagan Irish King that lived 166 A.D. The legend of two angels hovering over High King Art in battle because of his honesty enhanced his reputation as an honest man.

Or Fionn, both pronounced /Fin/.  This name means fair-haired.” The name comes from Fionn Mac Cool, the leader of the mythological band of warriors the Fianna.

Fionn Mac Cool was the biggest giant in Ireland and selected a special group of strong warriors to aid him in battle. These were the Fainna.

Everyone knew of Fionn and his wisdom, bravery, generosity and extremely good looks. He acquired much of his wisdom from accidently eating the Salmon of Knowledge.

He cooked the salmon (who had eaten nine hazelnuts that fell into the Well of Wisdom, giving it magical powers) and did not intend to eat it, but when he burnt his finger and put it in his mouth, became the first man in Ireland to consume some of the salmon and the knowledge went to him.

And his became one of the cool'est (get it?) Gaelic names.

Also spelled Cormack or Cormick... This name comes for the ancient Gaelic word “corbmach” that means the son of a charioteer.

Cormac Mac Art means Cormac, the son of Art, the High King noted earlier. Cormac was famous for his wisdom, generosity and laws.

He loved beautiful surroundings. He had a golden cup that would break if three lies were told.

Three truths would make it whole again. As with most legends, the mystical cup disappeared after he died.

While it’s a common Welch surname (Bob Dylan), it’s also one of the more popular Irish gaelic names for boys.

This is the Gaelic form of Raymond. It means "protector."

Probably one of the first and most famous folklore heroes to bear the name Redmond was Redmond O’Hanlon. He was the Irish version of Robin Hood who lost his land to the English.

He and his band of followers avenged the loss of the Irish lands and other wrongs inflicted on the peasants.

You pronounce the name ay-deen and it comes from the word for fire. In Irish mythology, Aideen was married to the Grandson of Fionn Mac Cool, Oscar.

Their love was so strong that when he died in battle, she too died, but of a broken heart.

If you’re tempted to pronounce this Ann, you’d be wrong. It’s two syllables--- awn—ye. The Anglicized form of the Gaelic name meaning is Anna, Anya or Hannah. Aine means brilliance, radiance or great splendor. It can also mean great prosperity.

In the ancient legends, Aine was one of the many wives of Fionn Mac Cool and was the queen of the fairies of Munster. Most people loved her and considered her warm hearted and both lucky in love and money. No wonder hers became one of the more popular female Gaelic name meanings.

The Anglicized version of this name is either Ava or Eva. The name, as odd as it looks, is pronounced “ee—fa.” In Irish legend, Aoife was the Xena of Irish folk lore and considered the world’s greatest female warrior.

Another Aoife in the history of Ireland was Aoife Dearg, which means Aoife Red, probably because of red hair. St. Patrick arranged her marriage. This name was at the top of the list of popularity in Ireland in 2002-2004.

You also spell the name Cairenn or Ciaran. It is the Irish form of the name Karen and pronounced the same. It comes from the Gaelic words for small friend or tiny beloved one. One historical character to bear this name was Caireann Chasdubh (Chasdubh means with dark curly hair).

She was the mother of Niall the famous warrior of Niall of the Nine Hostages who gave rise to the Ui Neill dynasties and was one of the High Kings of Ireland.

You pronounce this name as you would the Anglicized version Keera. It means dark, which people believe refers to either dark hair or dark eyes. St. Ciara, who began the monastery at Kilkeary located in County Tipperary, was one of the famous people named Ciara.

The Anglicized form of this Gaelic name meaning is Myrna or Morna but you pronounce the name Mir—ne. It means someone who is festive or high-spirited. In legend, Muirne is the mother of Fionn Mac Cool.

His father was Conall whom Muirne’s druid father had killed after she married him, but not before they conceived Fionn.

Until then - thanks for visiting Gaelic Name Meanings!  Please continue exploring your Irish side at Irish-Expressions.com.