Halloween Limericks are a Funny (and Spooky) Way to Express Your Irish Side!

Halloween Limericks are proof that there is an Irish limerick for any fun occasion!

In fact, one cool way to celebrate All Hallows Eve is to have a contest to see who can make up the spookiest limerick!  More on that later. 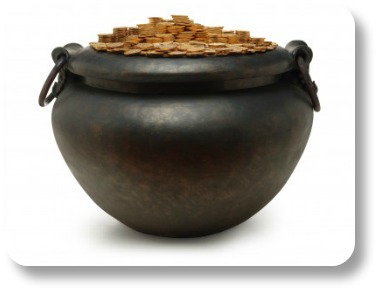 In the meantime, did you know that many of the traditions associated with Halloween originate from ancient Celtic customs?

Pagan Celts believed the night they called Samhain was a night when spirits could come back and move among the living. People wore masks and costumes to ward off the evil ones.

At your next Halloween party, you might tell your guests know some of the ancient stories and traditions of Halloween.

Then, just when your frightened guests start to head for the door - lighten the mood with one of these funny (and spooky) Halloween limericks!

Bonfires were a big part of Halloween to scare off evil spirits, and in the 19th century in Ireland, young men went around houses on the day collecting materials for the bonfires.

This is one of the origins of the 'trick or treat' tradition.

Carved pumpkins also stem from Celtic practices. Those who had to journey at night on Halloween carved turnips to use as lanterns.

The idea was that evil spirits would be frightened by the menacing face. Today, Halloween is a time for some fun, especially for the children.

One good way to get the kids involved and laughing, while at the same time encouraging them to use their imaginations, is to have them create their own Halloween limerick.

The suggestions you get are likely to range from the brilliant to the ridiculous, but that all adds to the fun.

Right up to the middle of the 20th century, Irish people as a whole were very religious, and very superstitious.

A large number of folks, especially those living in rural areas, really believed in fairies, ghosts, and banshees.

Halloween was a time of year that genuinely scared them, so you have to dig deep to find much humor associated with Halloween.

Fear and mystery are the predominant themes of Halloween rhymes and limericks.

The following two limericks will give you an idea of the superstitions and fears associated with Halloween. The second one is slightly more tongue in cheek.

In the modern world, the only scares people get at Halloween are from others playing pranks on them, like exploding bangers behind them. These experiences can be funny for everybody else, but less amusing for the victim.

This limerick is a bit more humorous, although it still has an element of fear about it.

This one pokes fun at the unfortunate victim of a prank:

As the Irish and Scottish emigrated in large numbers to America, they brought their Halloween customs and traditions with them.

These customs and traditions gradually spread to other communities, becoming the nationwide phenomenon we see today.

To finish off, we include a couple of the more modern limericks with an American touch to them.

A Halloween bash in my street
was a night that will never repeat
the spirits that come
were tequila and rum
and I ended up drunk on my feet.

How to scare kids away in the night
Want to give them a really big fright?
Go hide in the closet
They'll leave a deposit
When the boogieman busts out tonight.

That Was Fun!  What's Next?

Feel free to continue your exploration of this unique poetic style in our section on Irish limericks here.

And for even more information of this type, you may want to pay a visit to our main section on Irish Sayings here!